The floods in Alberta brought devastation to many, including artists. Initial estimates put losses to the arts sector at $3 million. Artists are needing to recover from the impacts of damaged or destroyed venues and workspaces, loss of equipment or cancelled contracts and events.

Within days of the flooding, Calgary Arts Development put together the “Calgary Arts Flood Rebuild” initiative that will raise funds to support artists and arts organizations from across southern Alberta. We were happy to work on the graphics to get the word out about this initiative and help motivate people to fix, rebuild and move forward.

It was definitely uncharted territory for us to come up with a visual response to something so vast and devastating to so many people. Here’s what our first attempt looked like (and herein lies a perfect example of how great collaboration with a client pays off): 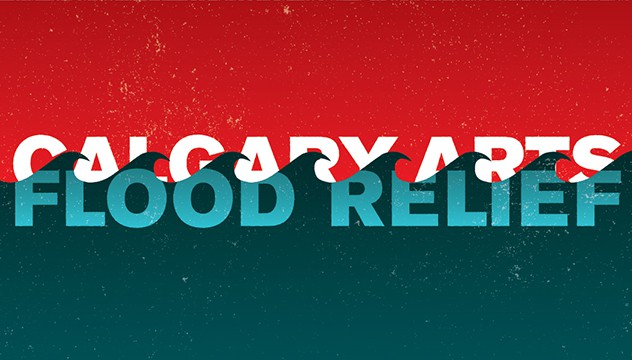 CADA’s feedback was that the emphasis on the flood didn’t reflect the positive aspect of the Rebuild initiative. This graphic couldn’t ignore the flood of course, but it needed to be about rising above it, or in their words: “Defiantly Overcoming Adversity.” Clearly this was the right call. After scrapping the initial design, this is what we came up with: 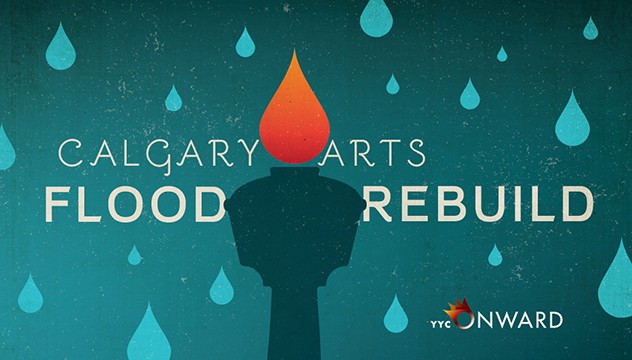 The Calgary Tower with its flame was an obvious choice in the end. While representing many things to Calgarians at various times, the flame became a perfect symbol of hope, and by graphically mirroring the shape of the water droplets, it fit perfectly into the theme of defiance against the water.

In addition to this, we were asked to come up with a logo to brand rebuilding efforts. While many words and phrases have been utilized to give a name to the collective spirit and effort of the city, Terry Rock, President of Calgary Arts Development, deftly noticed something hiding in plain sight: Calgary’s official but little known motto, “Onward.” We applied the flame we developed and gave it a sense of motion by blowing the flame sidewise as in a torch being picked up and carried forward.

Though done on a fast turn-around, this was work made stronger by the valuable input and collaboration with the folks at CADA.

GOOD Company will be donating the full commission for this project to the Calgary Arts Flood Rebuild fund.